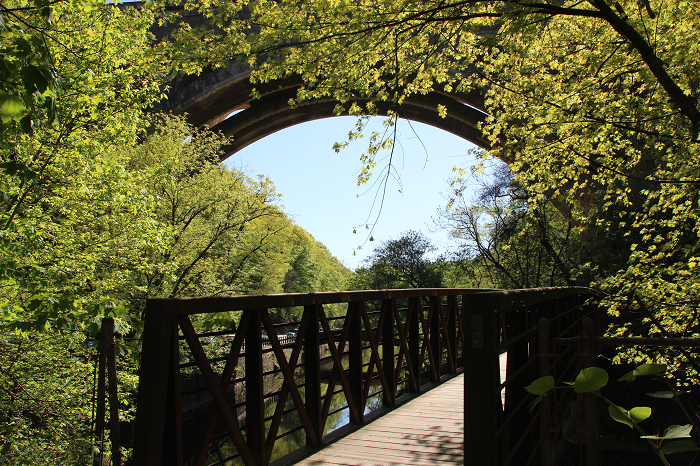 Ask residents of Northwest Philadelphia why they chose their neighborhood and you’ll usually hear that they love the area for it’s easy access to getting outdoors in the Wissahickon Valley Park, neighborhoods with main streets with plenty of restaurants, and the ease of access to Center City and the Montgomery County suburbs.

Learn More about Living in Philadelphia

Most of the Northwest Philadelphia neighborhoods share a border with the 1800-acre Wissahickon Valley Park. The park is named for the Wissahickon Creek that flows through the park. The park is home to miles of trails for hiking, biking, and horseback riding. Within the park you’ll plenty of scenic overlooks and other great spots for photos including the Thomas Mill Covered Bridge and the Andorra Meadow. People come from miles around to visit the park, but for residents of Northwest Philadelphia the park is practically in their backyard.

Andorra is a suburban neighborhood within the city limits of Philadelphia. The neighborhood shares the 19128 zip code with Roxborough and the city considers the area an enclave within Roxborough though most locals consider it an entirely different neighborhood. Andorra borders the Wissahickon Valley Park and is also home to Houston Playground and the Upper Roxborough Reservoir Reserve. Andorra Shopping Center is the main area for shopping in the neighborhood. It includes an Acme grocery store, Kohl’s, LA Fitness, a car wash, and a PetCo store.

Chestnut Hill is a picturesque neighborhood and the most expensive in northwest Philadelphia. The main thoroughfare through Chestnut Hill, Germantown Ave, has a unique variety of local shops and restaurants that includes everything from casual to fine dining. Summer concerts are held in the amphitheater of the 16 acre Pastorius Park. The community borders the Wissahickon Valley Park. The neighborhood is served by two train stations which makes access to Center City easy.

Located along the eastern banks of the Schuylkill River, East Falls offers residents plenty to do within the neighborhood and easy access to Center City. Residents of East Falls enjoy a wide variety of eclectic restaurants. Some personal favorites include In Riva for it’s great Italian food and outdoor dining space overlooking the river, Wissahickon Brewery which includes a large outdoor space and features various food trucks throughout the week, Falls Taproom, and Laxmi’s Indian Grill. Laurel Hill Cemetery is one of the main attractions in the neighborhood. This massive cemetery hosts a number of events throughout the year including 5k races, concerts, and outdoor movies.

Roxborough residents enjoy living here for the neighborhood’s many parks, events, shopping, and convenience to Center City and the suburbs. The neighborhood borders the Wissahickon Valley Park with miles of trails for hiking and biking. Throughout the neighborhood there are several smaller parks with scenic trails and playground equipment. Gorgas Park is located in Central Roxborough and offers concerts and events throughout the year and a weekly farmer’s market during the summer months. Ridge Avenue is the main corridor through Roxborough and is home to one of Roxborough’s two main business districts. Be sure to check out First Friday’s at the Roxborough Pocket Park and Roxtoberfest, the largest event in the neighborhood held each year in October.

Manayunk is well-known for the shops, restaurants, and nightlife along Main Street. This picturesque neighborhood is home to festivals and events throughout the year including The Manayunk Arts Festival, First Fridays, and The Manayunk StrEAT Festival. Manayunk’s Pretzel Park has a playground, an off-leash dog park, and hosts a farmer’s market in the summer months.  When in Manayunk, be sure to check out local favorite Main Street spots like Taqueria Feliz, Lucky’s Last Chance, and the award-winning Han Dynasty. Greg’s Kitchen is a small breakfast restaurant that’s easy to miss but well-worth a visit. The Manayunk Train Station is centrally located near Main Street and offers residents easy access to Center City.

Mt. Airy borders Wissahickon Valley Park and sits between Germantown and Chestnut Hill. Germantown Avenue is the neighborhood’s central business corridor where you’ll find an eclectic blend of shops and restaurants. Some local favorites include Earth, Bread + Brewery, McMenamin’s Tavern, an Mi Puebla. Off of Germantown Avenue you’ll find other great restaurants including Goat Hollow and Tiffin. Weaver’s Way Co-op and High Point Cafe are two local spots that are well-known in the neighborhood and worth a visit. Allen’s Lane Park is a popular neighborhood park that includes a playground and tennis courts. The park is also home to the Allen’s Lane Arts Center which offers camps, classes, and theater performances.

Germantown offers a unique mix of old and new. Germantown is located about a 20 minute drive from Center City. Throughout the neighborhood you’ll find beautiful Victorian homes and many buildings dating back hundreds of years. Germantown Avenue is the main business corridor through the neighborhood and there you’ll find an eclectic variety of shops and restaurants. Cliveden, a 6-acre estate built just before the Revolutionary War, is an historic site located within the neighborhood that offers visitors tours and lessons about the history of the area. Cliveden is also home the annual Revolutionary Germantown Festival held each Fall.