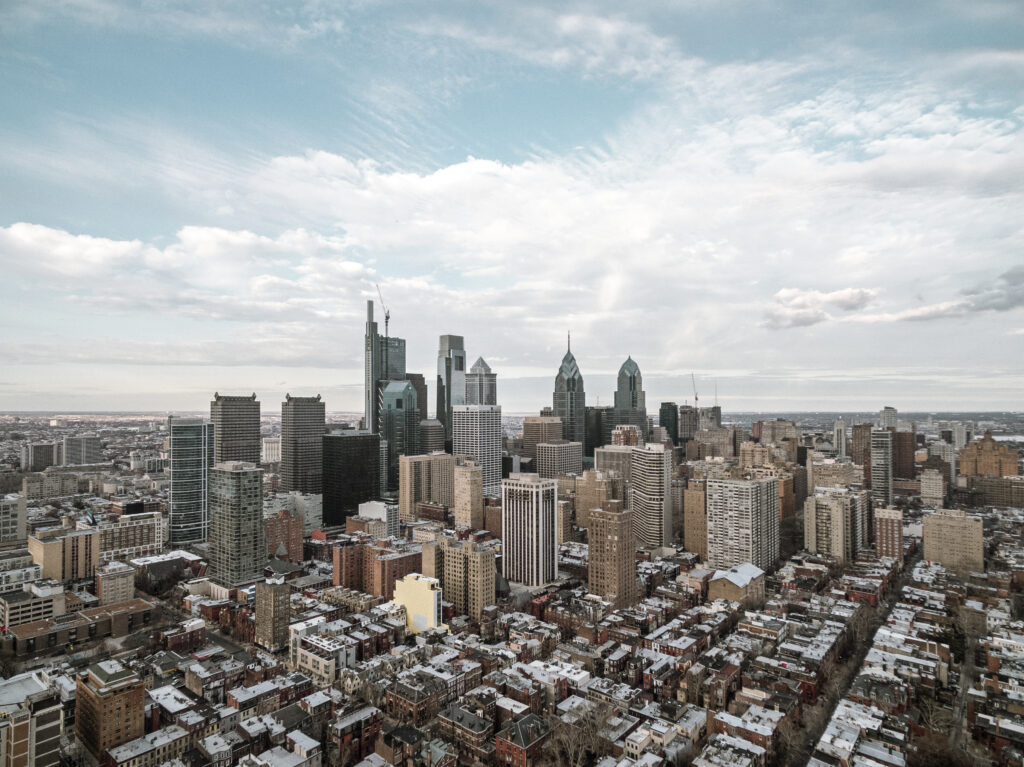 Center City is bordered on the east by the Delaware River and the west by the Schuylkill River (pronounced ‘skool-kul’). The city is divided between Center City East, the older part of the city, and Center City West by Broad Street.

Center City East is particularly popular for those who commute to New Jersey since it’s just across the river. It’s also easy to get to the airport via I-95. Center City West is a popular destination for those who will be commuting to the University of Pennsylvania, the Hospital of the University of Pennsylvania, and The Children’s Hospital of Philadelphia.

The median sales price for single-family homes and condos in the Center City area is in the mid-$300,000’s. The median price for new construction homes is in the high-$500,000’s.

Below you’ll find the newest Center City real estate listings directly from the local MLS. At any given time there can be anywhere from about 1500 to over 3000 homes for sale in Center City.

It’s definitely a seller’s market in Center City. People love living the city’s urban center and being able to walk to local restaurants, parks, and museums. The average sales price for Center City homes is around $500,000 and many homes sell for well over $1,000,000. Homes in Center City sell in just about every price range but more homes sell in the $500,000 to $600,000 price range than any other price range.

The typical Center City homes for sale are 2-3 story rowhouses and high-rise condos. New construction homes are going up everywhere. Many of these homes feature roof decks and garage parking.

Home values have been on the rise and new listings have been on the decline. Of course, that’s great for sellers but home buyers can expect bidding wars and homes selling within days of going on the marketLiving in Center City

Center City is a great place to live. It’s a vibrant and walkable part of Philadelphia that offers great dining and nightlife, beautiful parks, and world-class museums and performing arts. The neighborhood offers easy access to major employers including the University of Pennsylvania, The Hospital of the University of Pennsylvania, and The Children’s Hospital of Philadelphia, and Comcast. Getting to Philadelphia International Airport can be done on train or a short car ride.

Some of our favorite things to do in Center City are to bring our family to Schuylkil River Park. The park has a great playground for the kids and a fenced-in dog park with a turf surface where our dog loves to play. Both Rittenhouse Square and Washington Square are great spots for picnics or to just to relax in the sun. You’ll always find artists painting the scenery in these parks.

There are tons of great restaurants. We definitely recommend dining al fresco at Parc on Rittenhouse Square. We have a number of amazing restaurants by renowned names including Jose Garces, Stephen Starr, Marc Vetri, Marcie Turney & Valerie Safran, Michael Solomonov, and more.

If you love sports then you’ll love the easy access to the stadiums where the Eagles, Phillies, 76ers, and Flyers play. The soccer stadium where The Philadelphia Union plays is outside of the city but it’s reasonably easy to get there.

There are amazing museums throughout Center City including the Philadelphia Museum of Art, The Barnes Foundation, The Rodin Museum, The African American Museum, The Museum of the American Revolution, The Academy of Natural Sciences, and The Franklin Institute.

Philadelphia is often called a City of Neighborhoods. Throughout the city you’ll find a number of different neighborhoods each with their own character and feel. Here’s a look at some favorite neighborhoods in, and near, Center City. I’ve listed the neighborhoods below by neighborhoods on the East and West sides of the city.

Growth in Fishtown has exploded over the last several years. Since 2012, the median home value in the area has nearly doubled from about $175,000 to close to $350,000. Fishtown is a vibrant community with great parks and plenty of local shops and restaurants. The main business corridors along Girard Avenue and Frankford Avenue offer residents a unique variety of gastropubs, coffee shops, and more.

Northern Liberties is one of the hottest neighborhoods in Philadelphia. The area has seen a massive amount of development over the last several years. Northern Liberties residents enjoy a wide variety of restaurants and shopping right in the neighborhood. The Piazza at Schmidt’s is a local destination that offers a great variety of events, shows, and festivals throughout the year.

Old City is Philadelphia’s historic district. The neighborhood is located in Center City East and borders the Delaware River across from New Jersey. Old City is home to events throughout the year including First Fridays, a monthly event where the neighborhoods art galleries open their doors and welcome visitors. In Old City, you’ll also find many of the city’s historic landmarks including the Liberty Bell and Independence Hall.

Queen Village is a popular neighborhood for it’s proximity to Center City and it’s eclectic cafes and restaurants. Queen Village is one of the first settled neighborhoods in the city and it has a historic charm with historic homes, narrow streets, and old trees. There are four parks in the neighborhood: Bainbridge Green, Weccacoe Playground, Mario Lanza Park, and Shot Tower Playground. Much of Queen Village falls into the popular Meredith School Catchment.

The Graduate Hospital neighborhood, also called Southwest Center City or South of South, is a mostly residential neighborhood dotted with local shops and restaurants. This area has seen a construction boom in recent years and has been one of the fastest growing neighborhoods in the city. The neighborhood offers easy access to Center City, the University of Pennsylvania, and the Children’s Hospital of Philadelphia and has become popular for those who commute to those locations.

For more info about living in Center City check out these additional resources . . .

Buying a Home in Center City

Center City real estate prices have been rising rapidly. The chart below shows the increasing median price of homes sold in Center City since 2012. 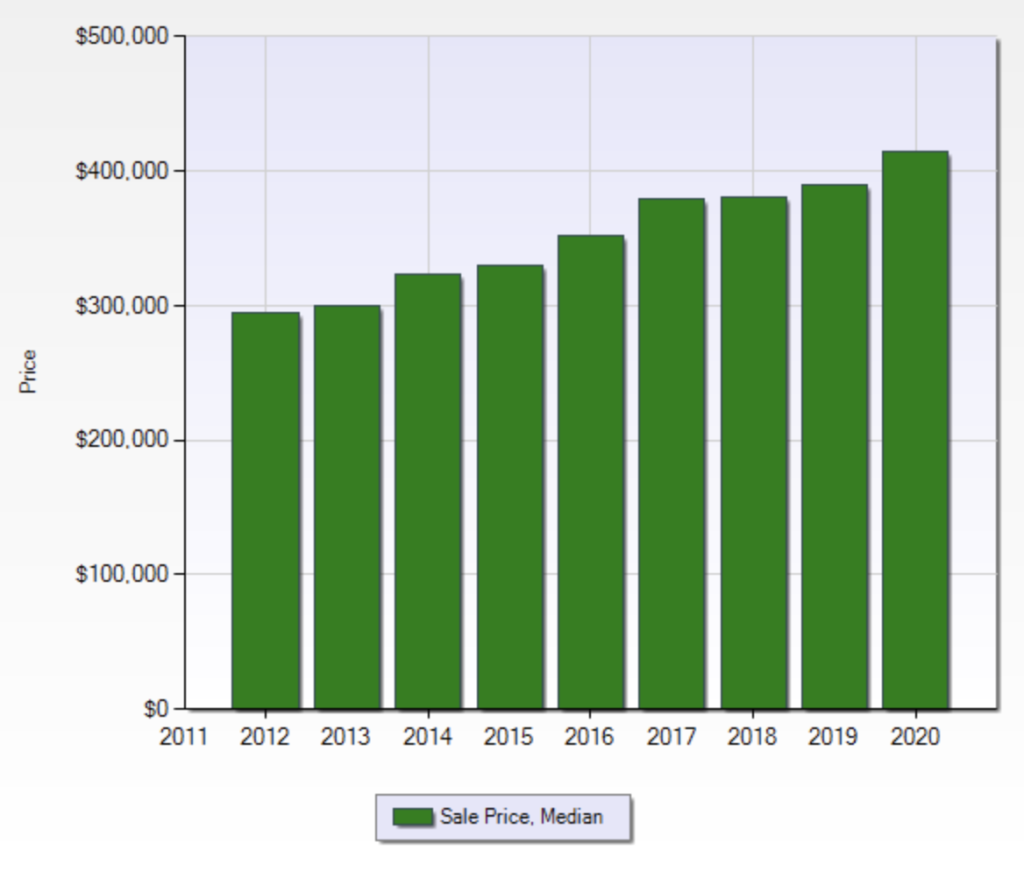 If you’re considering buying a home in Center City you can expect a competitive real estate market. Most homes receive multiple offers and sell quickly. By working with a local real estate agent and getting your mortgage pre-approval letter before you start looking at homes you’ll best be able to narrow down neighborhoods and be ready to make an offer when you find the perfect home.

There’s a lot of types of homes for sale in Center City. You’ll find some of the oldest homes in the US in the city but there’s also a lot of new construction homes.

Single-family homes are often 2-4 bedroom rowhouses. There’s also plenty of condos for sale and we have a few co-op buildings, too.

Selling a Home in Center City

Even though it’s a seller’s market in Center City it’s still important to get your in it’s best possible condition before you put it on the market. Getting your home organized, de-cluttered, and ready for photos is the most important step. Generally, you’ll also want to take care of minor repairs, get estimates for more major issues, and put on a fresh coat of paint. Of course, that depends on time and budget.

Some sellers may need to list their home as-is if they need to move quickly or don’t have the time or money to do much home prep. An experienced Center City Realtor® will help you make the best decisions on getting your home ready given your unique circumstances.

Pricing your home correctly for the market and condition of the home is also important. Determining the right asking price will expose your home to as many buyers as possible and help you maximize the sales price.

Looking for Realtors in Center City? Working with the right real estate agent can make your home sale or purchase as smooth as possible. When choosing a Realtor be sure to work with someone who is experienced with determining home values in Center City and can successfully guide your transaction from start to finish.

Philly City to Suburbs offers a great network of Realtors in Center City who can help you with your home purchase or sale. For more information, send an email to jon@phillycitytosuburbs.com.